Hypertension, most commonly known as ‘Blood Pressure’ is deemed to be a Silent killer, which is widely prevalent among the people due to various factors owing to the modern life style.

Today most of the people have some information about the ‘B P’, like it’s ill effects,  upper and lower limits (Systolic & Diastolic), how to maintain within limits etc. This information itself makes one overanxious and stressful instead of being useful, from the moment one is diagnosed as having Hypertension (HTN). First thing that comes to one’s mind when he has a headache or when he is under constant stress is the HTN (hypertension). Hyperlipdemia / Dyslipedemia or in other words high blood cholesterol mostly found associated with HTN.

Is it really as dreadful as it is made out to be?

Ayurvedic practitioners are often confronted with patients already diagnosed as having HTN with reference to the recommended safe limits of Systolic & Diastolic pressures. How reliable/important are these readings to assess whether one is healthy or not?

We often come across patients with high systolic / diastolic pressures, and yet are so comfortable. And on the contrary, we hear patients complain of unease, discomfort, pain etc., despite the controlled BP values etc. This signifies that, keeping a check on one’s BP / cholesterol levels alone does not make one healthy and is not an absolute indicator of health.

In view of the above factors, Ayurvedic doctors are faced with situations, when it becomes difficult to decide whether to focus on bringing down the BP levels through Ayurvedic drugs, compromising on the classics or to follow the classical line of treatment, paying less attention to the BP values initially. (Which is bound to come to limits after the treatment).

What Ayurveda can do in HTN / Dyslipedemia ?

Before going to this, first it is important to interpret HTN in Ayurvedic language.

HTN is of two types – Primary or  the essential HTN and  secondary HTN. Clinically both of these may be benign or malignant. Haemodynamic factors regulating HTN are cardiac output and the total peripheral vascular resistance.

Coming to the Ayurvedic interpretations for HTN, we have to first know what are the existing conditions in Ayurveda, which are understood or compared to HTN. Uccha rakta chapa, Shonita dushti, raktagata vata and so on are compared or correlated to HTN. Is it the case always? And is sufficient to understand and manage HTN in Ayurveda?

Measuring BP and treating a patient just for his High BP is not a classical way of treatment as per Ayurveda. The possible sampraptis that might occur in the body in a hypertensive state is explained clearly in the classics and these in any way cannot be directly correlated to HTN, but can be used to understand such new conditions.

It only is a pointer to understand a new disease condition in Ayurvedic way.  This article is mainly aimed to clarify that

Once his dosha dushyas are brought to prakruta awastha (प्राकृत अवस्था), BP values automatically come under control. And most importantly knowledge about the samprapti that is happening helps the doctors to get an idea as to the stage from where the treatment can begin and also helps in approximating the required time span, to bring the BP values under control, which is important from the point of view of the patient and the doctor too. Ultimately that which is important to doctor as well as the patient is “when can I expect my BP to come under control”? If the samprapti is understood, doctors can approximate the time span required for the BP to come under control. But the treatment always should be towards prakruthi sthapana (प्रकृतिस्थापन) and not a TREATMENT that lower BP like sarpagandha so on.

In reality we need not understand or frame a pathogenesis / samprapti (सम्प्राप्ति) in Ayurveda for HTN, because HTN / High BP only is a presentation in different other sampraptis. This effort of interpretation of HTN in Ayurveda is made to simplify the concept and only is a pointer as to how a new condition could be interpreted based on Ayurvedic principles. Even after not having measured the BP, we can treat a condition based on our lines if the patient is ill when looked at, in Ayurvedic perspective.

In HTN there is

Initially, there is increased cardiac output, resulting in peripheral resistance after some time.

What actually happens in HTN?

To know this, physiology has to be first understood to the core. If Prakruti (प्रकृति) is understood well, vikruti (विकृति) could be known.

Creatures are formed out of ahara (food / आहार) and so are the diseases. Therefore any change, be it a positive or a negative, is a result of ahara and this shows the importance of the food.

So derangement in any stage of this cycle itself is the cause for all diseases and is true for HTN as well.

Components of the body involved in HTN are,

So, it could be inferred that HTN is the Derangement of

Any or all of these can lead to high blood pressure once impaired and any one of the impaired component will invariably affect the other as they are interlinked.

Firstly it should be understood what exactly is this entity called drava (द्रव). It is commonly known that the circulating fluid is the blood and its pressure we measure. Is it the case when it comes to Ayurveda? Is it the blood / the rakta dhatu (रक्त धातु) which is circulation?

No, the drava, that is to be considered is the AHARA rasa, the end product of jatharagni paka  (जाठराग्निपाक) and not the RASA or RAKTA. Because according to chakrapani, AHARARASA – the resultant of jatharagani paka, is the one in circulation. So, the circulating fluid / drava is predominantly is AHARA RASA. It might contain a portion of rasa and rakta but is mostly ahara rasa.

How does it get deranged?

These are the samanya ama lakshanas. As per — drava guru aneka varna, hetu sarva rogananam durgandhi hariita etc are the ama lakshanas. Based on this, the formed AMA may be of two consistencies, i.e

AAMA (आम) can be of two types, 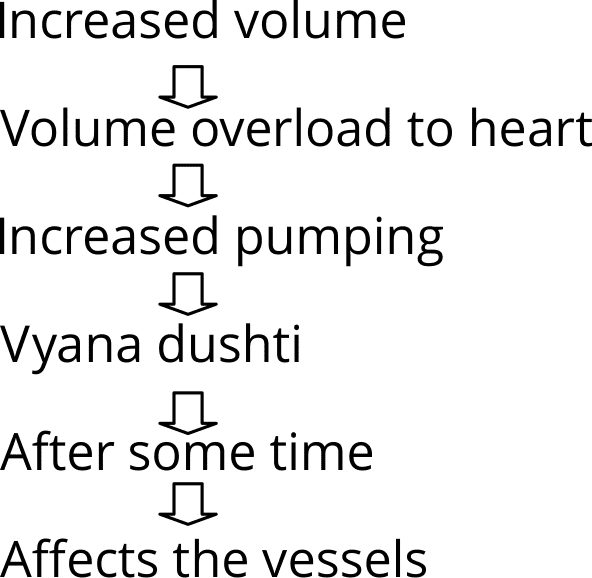 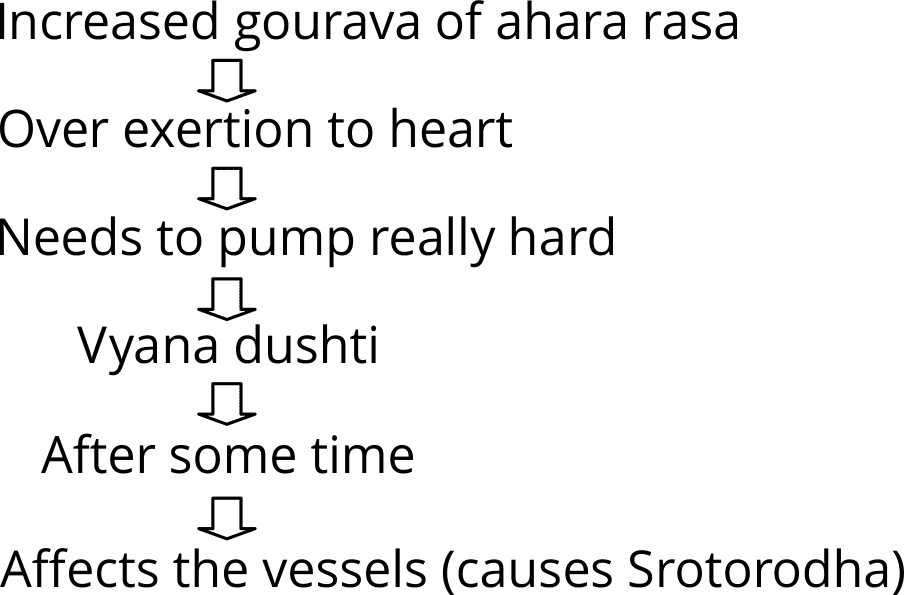 Any of these or both these sampraptis can happen when the drava or circulating fluid gets disturbed.

Not only this, drava can also get deranged by pre-existing pathologies like

Here, in derangement of drava, based on the nidana sevana, type of ahara rasa dushti is to be found out and treated accordingly. In-case of grahani, pandu … so on, and treatment should aim at vighatana of resppective sampraptis. 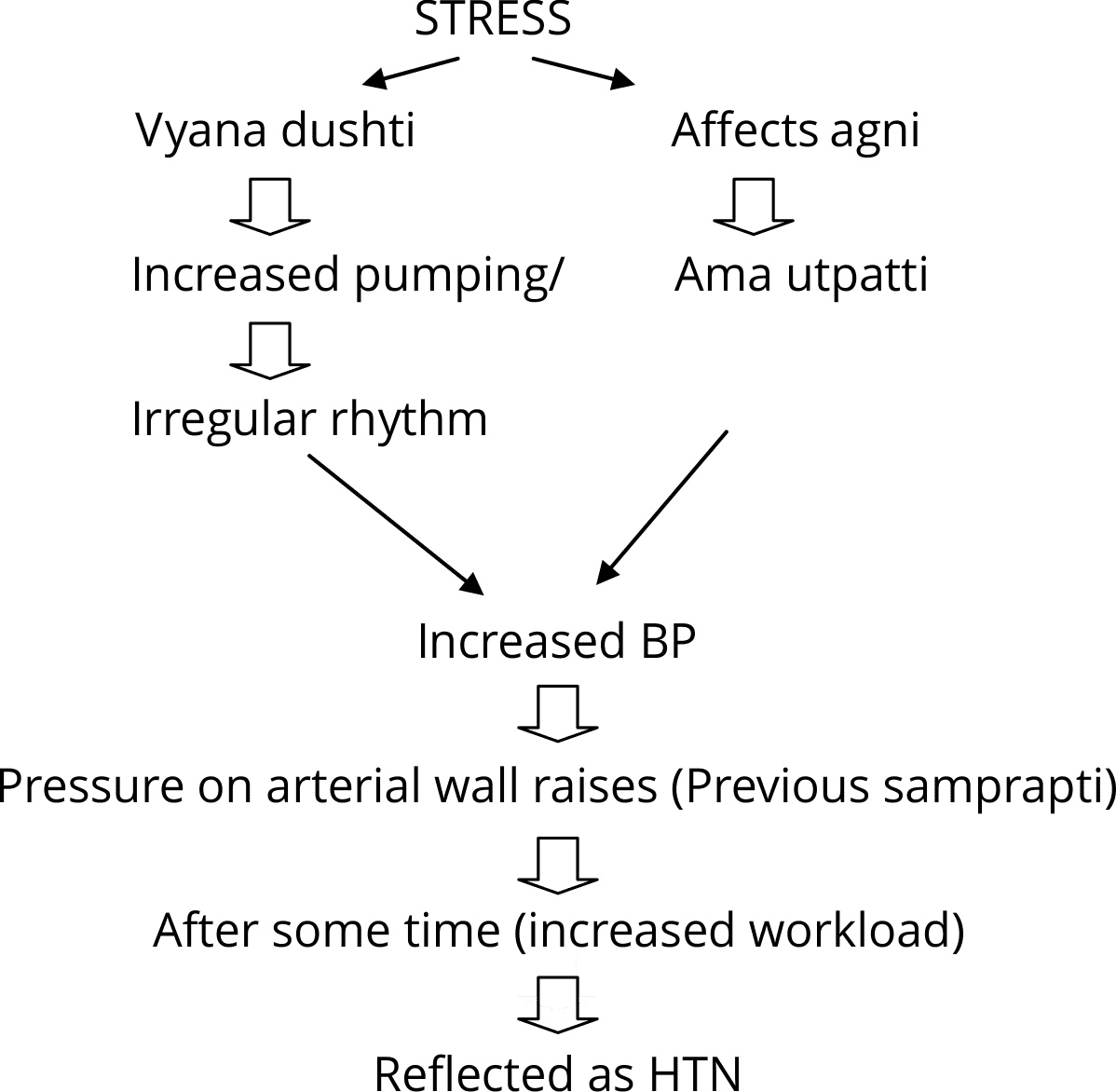 Stress is another important factor in causing High BP. It is a common knowledge that, when a person is under pressure /tension, body gives out natural reactions like increased heart rate /increased respiration and so on. If this is the state once in a while as mechanism (fight or flight) of survival, it does not cause any harm to the body but, if continued for a prolonged period of time, body suffers the changes like increased HR etc, throughout, resulting in vyana vata dushti. When vyana is affected, normal functioning of hrudaya is affected. In case of HTN, longstanding stress vitiates vyana vata – leading to increased vyana karma i.e increased pumping. This increased pumping further vitiates vyana vata.So this becomes a vicious cycle.

Here in such cases, only after nidana parivarjana, (i.e, tackling stress) first, the vyana vata should be taken care of. Treating vyana without reducing stress or using anti hypertensives like sarpagandha  / manasamitra vati etc., is  not the classical approach. After having tackled stress, vyana vata has to be corrected and then the agni, because agni suffers greatly by stress.

The vessels here are the dhamanis, because the ahara rasa, the circulating fluid remains in circulation in the dhamanis, as they are sthana of Ahara rasa.  This only means, that 365 days 24/7, this ahara rasa keeps circulating without stop and this is the entity which gets replenished every day. So every meal contributes to raised or lowered BP. Therefore, a sphygnomanometer measures the “ahararasa stimulated by vyana vata in dhamani”.

Initial sampraptis happen at the level of dhamani i.e., mainly in the form of avarodha. Changes in the arteriolar walls result in raised peripheral resistance (only after some time). 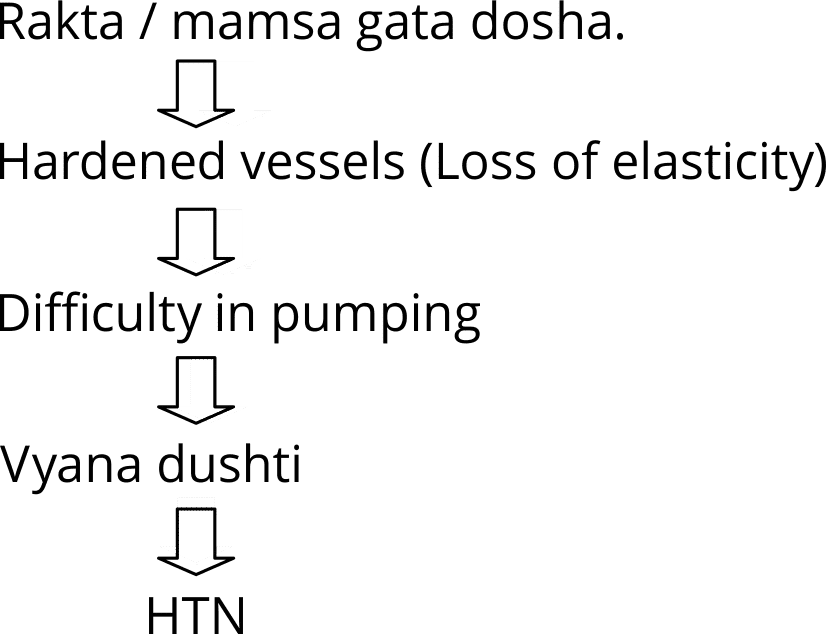 In longstanding HTN case, doshas are usually uttana dhatugata, they bring in some structural change in the arteriolar walls. They pose obstruction to the normal flow. When the hrudaya (हृदय) has to pump against this avarodha (अवरोध / obstruction), it needs to work really hard, then vyana vata dushti happens. Unless this dhatugata doshas are cleared, vyana dushti will not stop. So in such cases of established HTN with dhatugata dosha, it may take months to years for the BP to come under control. Here too the treatment should be targeting the dosha dushya and not BP. After having cleared the dhatugata dosha, vyana vata which has undergone dushti, secondarily has to be looked after. Anulomana has to be done. 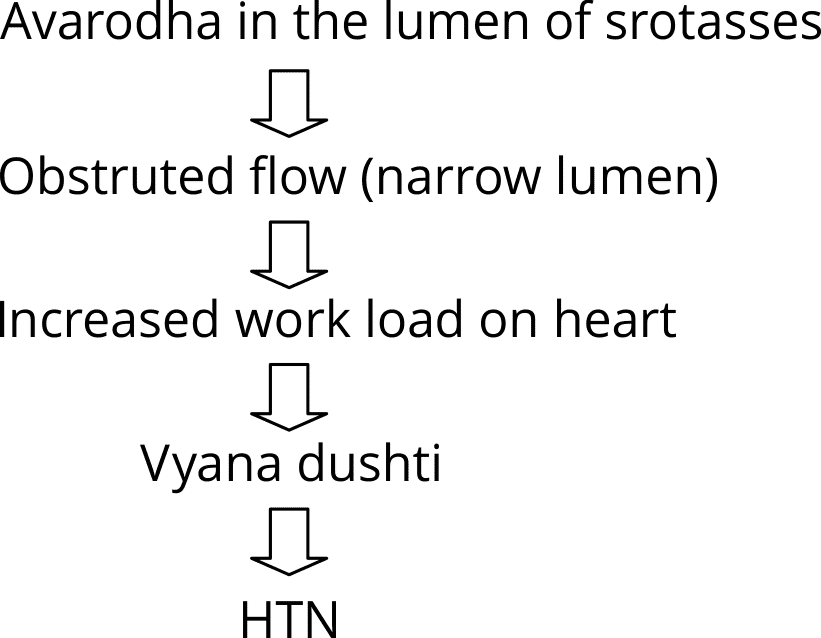 This is easier to treat when compared to the first condition. Because, the doshas here are not dhatugata. So clearance of srotorodha and then the vyana vata correction should be the line of treatment.

In such cases, controlling BP needs lesser span of time compared to first one.

So whenever a patient  comes with the presentation of HTN, all the above factors have to be considered which are the real causes for the symptom, rather than HIGH blood pressure which is just a manifestation or a presentation of underlying cause.

Sriranga Ayurveda Chikitsa Mandira is an Ayurvedic treatment center located in Mysore, India. It is the HEALTH-CARE Division of Prakruthi Ayurveda Prathishthana®, Mysore.